This article is all about communication. First, we want to learn more about external and internal communication and how useful the concept of the 5 W’s questions (who, what, where, when, why) can be. Second, we want to write about the right timing of communicating your message and third, we write about the different tools each of us can use. As always we will share our own approach and the many lessons learned. Good communication is half the battle and to successfully organize a low waste festival you need to communicate with your team, with other teams and with your stakeholders but also with the festival attendees.

The key to a successful communication is a clear mission, to always keep your leitmotif and to be well prepared. The 5 W’s questions help to define and set up your mission. With orientating yourself along these questions you can set your objectives and based on that develop a communication strategy. We wrote an article in which the mission, vision and objectives of our festival are explained more in detail. It serves as a first introduction to the topic. Further we want to share a visualization of how to use the 5 W’s questions.

After answering the “why” question with going into detail of what objectives you follow and which is your mission and long term vision, you select your target group. According to your audience you decide about the content to share with them. Important is also the question of when to communicate. Nowadays everyone is facing an overload of information to process. This is why we want to be as clear and precise as possible – get straight to the point with your message and communicate it through the right channels.

The internal communication is absolutely key. The waste management team should be included in the whole event management process, being a more centric team. However in most cases it is not; at least not yet. Almost everything related to organizing an event can be made more circular but often isn’t and here comes the challenge. Constantly, you will be communicating with all the other teams, answering questions about recycling, reusing, coming up with alternatives to waste less and most importantly, remind people of the environmental impact of everything they do.

For the makesense festival the waste management team produced and shared some short videos for some of the other teams, explaining our mission and how to get there. It is important that everyone organizing the event knows that you and your team are available to support them. To spice up the internal communication videos are a very good tool. You grab someone’s attention for a few minutes and they will actively listen to your mission.

Further, it can be useful to attend the first meetings of all the other teams so that you can intervene. The sooner they will be sensitized to the waste aspect, the better your results will be and the easier it is afterwards. So to sum up, the internal communication is mostly done before the event and should prioritize internal communication channels such as slack, a video to share on their facebook group and a personal get together.

Our first lesson learned: communicate better horizontally within and among the teams. In the ideal case you would have one of your team members in every other of the teams. So imagine you build your waste prevention team that is actually composed of one team member each of every other team. It would be more efficient and you assure that every action you do takes the waste impact into account.

Constantly, you will have to communicate with different stakeholders. Among others for the catering, logistics, and most importantly the festivalgoers.

We came up with a circular idea to advertise the festival: the infinite flyer. We did not want to use flyers but still we had to catch the attention of as many Parisians as possible. One of the most efficient ways is to print some flyers and distribute them. However it is also one of the most unsustainable ways to advertise something. Makesense invented the first circular flyer of its kind. In the Parisian Metro we were two teams, one upstairs and one downstairs of the escalators. Both teams gave away flyers telling the people that now they have only 30 seconds to read them and give them back again when they either arrived upstairs or downstairs, where they were collected again. So this allowed us to only print a few flyers and to put a smile on peoples’ faces!

Here you can watch the video:

First  lesson learned, if you restrict something because it creates waste, try to provide an alternative so that nobody feels any restriction. For example, we did not allow to hand out flyers or any unnecessary goodies. But we made sure to encourage the festivalgoers to take pictures of some of the few flyers. Another thing could be to encourage the companies to bring goodies that are of actual use afterwards.

The second lesson learned is about the communication with our suppliers. We did a small impact evaluation during the festival (more information you find in the section “Impact Measurement”). During one of our qualitative interviews with the responsible of the food truck we received the feedback that we did not communicate our waste strategy in advance. They would have preferred to know about it at least one week before. Even though you might select suppliers that claim to be such and such, check with them upon every detail.

Second, let’s have a look at the different stages of communication. Communication is necessary BEFORE the event, DURING the event and AFTER. The order is not only chronology but also according to their importance.

Our lesson learned in terms of communication was that we did not communicate well enough DURING the festival. We did the signage on our own only from recycled materials, we collected 200 second hand T-shirts and printed our logo on them, we organized an atelier to sensitize festivalgoers about food waste (Disco Soupe) and to fill their hungry bellies. This is how we saved kilogram over kilogram of food to be wasted. But participants do not always and directly see those environmental aspects behind a supposingly normal t-shirt or sign standing in front of them – and who would naturally? So it is your responsibility to spread the word, to make a buzz on social media and to educate festivalgoers on what can be done and what you’ve actually done! Ultimately, this also requires a better horizontal cooperation between different teams such as the communication team for this specific actions. As we already said; communication is key! The hashtag makesensefestival was for a while one of the most tweeted in France and they did not tweet anything about our effort to lower the environmental impact, because we failed to communicate enough with the social media team.

This section explains every tool we used and we also prepared an infographic of the pros and cons. Before the event we sent out some informative newsletters and at least in one, we spread the message about our waste policy for the festival. The newsletters were targeted to our festivalgoers and informed them about the detailed program, any changes whatsoever and about general information such as our waste policy. The waste prevention team did an infographic to visualize the contents and catch the reader’s attention (sorry French content!). The best tool to do those infographics without having extensive knowledge in graphic design is canva.com.

We made our waste policy public about one week before the festival. Soon enough so our festivalgoers can be prepared and not too late so they won’t easily forget about it.

And speaking about the tools, which one would we recommend to choose when communicating vertically and horizontally with and among your teams? From Slack to Facebook and in person or on skype; everything is possible. The easiest way of communicating is definitely Facebook. We opened a non-public group where we constantly updated each other and we worked on Google Drive for any kind of document that we shared and had the need of working on simultaneously. We also tried Slack but it didn’t work well at all. Within the team it was ok, but as far as it concerns the volunteers, they preferred facebook and Whatsapp. An important tip we want to give you, don’t use too many communication channels because this can create chaos and confusion. At some point you might not remember anymore with which volunteer you talked on facebook and with which one on Wha’s App. 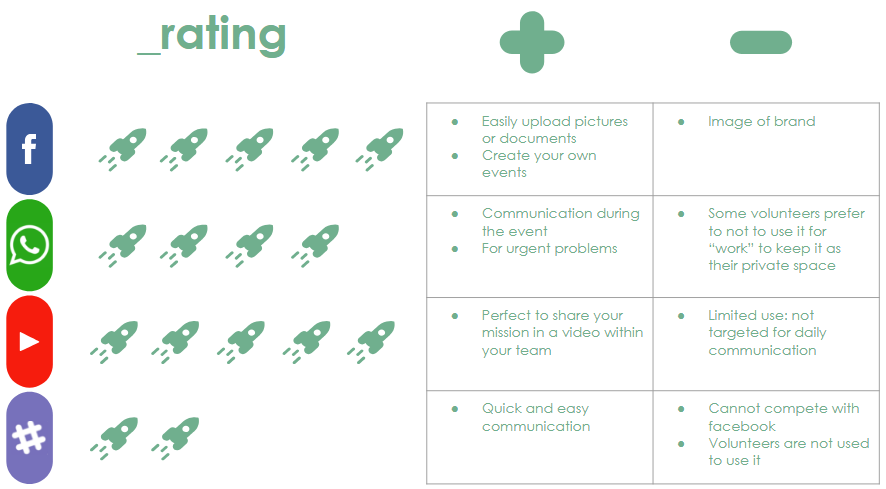 Our fourth and last lesson learned concerns the charte we created to gain an overview and visualize the key points! Not only that the feedback we received was great but also we could use the same charte not only before the festival to raise awareness and understanding but also during the festival as a little reminder. These charts were printed on a DIN A3 paper and there was no way around it. However you can always use recycled paper for printing or you make sure that this paper gets recycled or will have a second life. 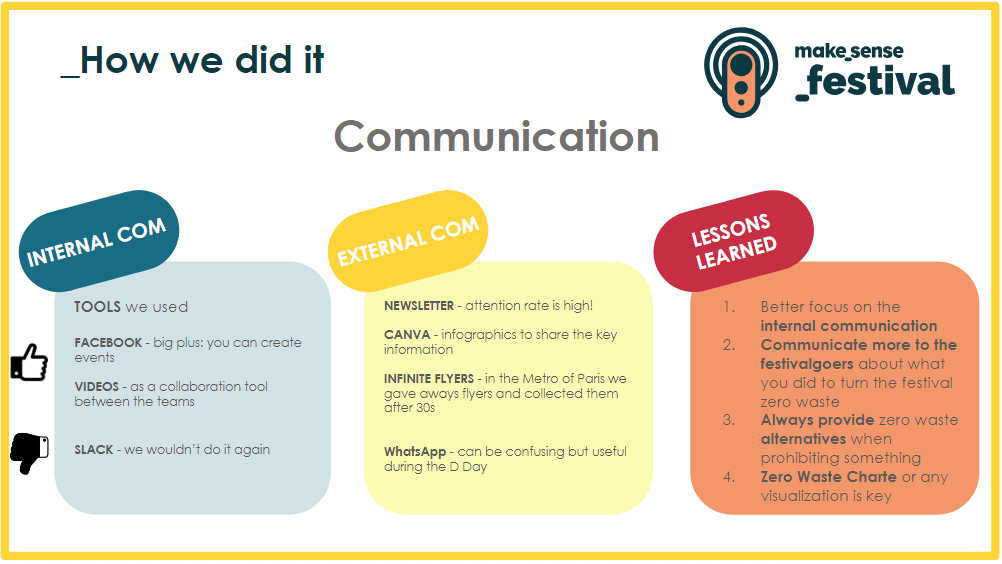 Hello all! I am Janine and a community developer for Future of Waste. I am absolutely passionate about waste and I am living a Zero Waste Lifestyle. I am so happy to have had the chance to organize a large scale Low Waste event. I want to help to brush up the image we have about waste – it is a resource and not trash, so let’s be creative!

Credits for the home photo: Photo by it’s me neosiam on Pexel 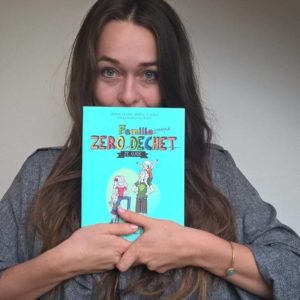